So last week a few of the Brainstorm nerds embarked on some market research into the importance of staff outings, and wound up essentially paying to live like a homeless person for the weekend! Download Festival 2016 was a roller-coaster of emotions, noise and almost all types of weather, but despite the mud baths, the nerds found it a well-deserved and enjoyable break from office work! 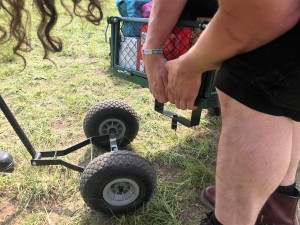 Arriving on the Wednesday was glorious, the sun was out, everyone was cheery; until the long haul with tents and camping gear through the campsite. Top tip for anyone hoping to experience an outing like this… Make sure you have comfortable footwear, and if you use a trolley- make sure its sturdy! You don’t want the wheels to fall off halfway there! The weather held out until Friday afternoon, which was perfect, as it made Wednesday and Thursday optimum bonding conditions! BBQ’s, drinks, conversations, and laughter with many people whom we’d only just met.

Now our Head Nerd is well into his technology and gadgets, and managed to get a stream of one of the bands playing on Friday (BabyMetal) to over 40,000 live viewers via Periscope. That was a highlight in itself! If you haven’t caught up on our previous blog about the importance of music, now would be a good time to do so. Our nerds, while completing this field work, found that standing in a crowd watching live performances from legendary bands such as Rammstein, Black Sabbath, and Iron Maiden; provided everyone with a sense of belonging and importance. We’d even go as far to say a sense of family.

The evenings were probably the most fun; both nerds were dragged along to a silent disco, which sounded lame at first, but after getting over the appearance issue of wearing old school, clumpy headphones, there was no one left standing still; everybody was singing and dancing and having a good time. Yet again however, Head Nerd took this opportunity to film our antics and bearing in mind the video recording only picks up people singing along to two different tracks without any background music, it’s pretty dire!

The end of the weekend came all too soon. The weather had put a bit of a downer on the final day, all items of clothing were soaked and muddy, shoes were ruined, tents had to be packed away in the rain, yet our spirits weren’t dampened! Even whilst pushing what was left of our trolleys through shin-deep mud, and watching people having to push cars out of the car park! All in all, it was a rather successful weekend to say the least, friendships and bonds were made for life, and we at Brainstorm proved our point… Staff outings are good for the employees, the boss, and the success of the company. Try it sometime!