Stressed at Work? Adopt a Pet!

Stress in the workplace is one of the biggest issues in the business world. Last year 440,000 people in the UK reported a work-related stress level they believed to be making them ill. That’s 40% of all work-related illness. There are loads of sources of help out there, but it really comes down to how you can deal with work pressures, most of which seem to be out of your control. Bit of a bleak outlook really isn’t it… Well that’s where owning a pet could come in handy!

Believe it or not, scientific research supports the theory that owning a pet can reduce a person’s stress levels significantly. Dogs in particular can reduce stress, anxiety and depression, along with reducing loneliness and encouraging exercise, even improving your cardiovascular health. But it’s not just canines that have this effect. (Which is great if you’re working in an office nine till five and can’t afford the time for a dog.) Cats have been shown to boost happiness and lower levels of cortisol after just 15 minutes of quality time with them. Studies suggest it is the interaction with an animal that reduces stress levels. This can be explained using two examples:

If you think about it, it makes perfect sense; you’ve spent a long day in a hard-working environment, drinking weak coffee, and interacting with people that are really starting to get on your nerves… And then you come home to be greeted by unconditional love and an animal that can only speak to you with his or her eyes!

But if you don’t think you’re cut out for a dog or cat or even a small fluffy hamster, studies have found that simply watching a fish tank (vs. a bare wall) for thirty minutes, lowers blood pressure significantly and has also been found to be a more powerful relaxant than several proven meditative techniques! 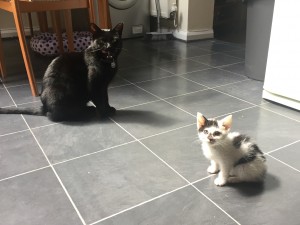 Our Brainstorm Nerds work hard every day, so naturally stress levels here can run high from time to time. So a few weeks ago we paid a visit to the local rescue centre Freshfields and found a 3-week old kitten needing a home. So as of this week, we now have an 8-week old fluffy nerd in the making! So we can say from experience, owning an animal definitely reduces stress levels in the workplace! And rescuing or adopting a pet rather than spending hundreds for a pedigree is so much more rewarding. So if you’re stressed out, increase your animal contact time!